Production Team Member of the Month

CJ Wittbold "He's a little guy in a big chair world just trying to figure out where he fits in the world. WIDR is a place for odd people and the normys. It's a home to anyone who comes through their doors." How long have you been volunteering at WIDR? Two years. What is your most memorable moment at WIDR? Battle of the bands. It was just great hearing music from a bunch of different bands live. What would be your dream lineup? Buddy guy, Rolling Stones, dr John. What does WID
Zack Zagula

The EDM duo from Chicago that calls themselves Louis the Child consists of Robby Hauldren and Freddy Kennett. Robert David Hauldren was born on September 7, 1996, and grew up in Northfield, IL. Before Robby decided to jump headfirst into his professional music career he attended one academic year at the University of Southern California. Frederic Judson Kennett was born on October 19, 1997. Early in Freddy’s career, while he was still in high school, he produced music under t 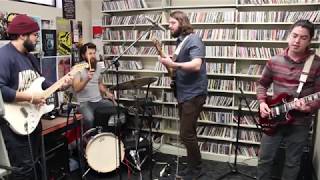 What We're Listening To

This Month brought WIDR’s rotation rack a number of different indie-pop records that are guaranteed to keep you going this semester. Our WIDR staff picked some of their favorites for an upbeat playlist full of dance grooves. 1. “Bedroom,” by Langley: Lo-fi acoustic song with great lyrics, a beautiful chorus and and ending that will force you to listen to it again. Langley is a fabulous local artist with serious pipes. 2. “Follow the Leader,” by Foxygen: Sounds like a classic
DJ Contra Asset, Program Director

The Sonic Delivery Service Fridays 8-10pm We sat down with The Postman and asked about his experiences here at WIDR FM. How long have you been DJing at WIDR? 15 months What is your most memorable moment at WIDR? Nights when the phone line is hot! Your Postman loves to hear from you on the studio request line@ (269) 387-6303. Who would be your dream guest to have on your show? I'd like to host the other "Postman", power forward, Karl Malone, to find out he "delivered" week aft